Revealed: legal aid cuts forcing parents to give up fight for children

By: Owen Bowcott, Amelia Hill and Pamela Duncan, for The Guardian

Original Article can be found Here.

Deep cuts to legal aid have inflicted such disarray in family courts that parents are abandoning efforts to maintain contact with their children, the Guardian has been told, while one of the main architects of the austerity measures has admitted they are “draconian”.

Protracted austerity since 2012 has reduced funding by about £950m a year in real terms, causing an alarming rise in the number of people forced to represent themselves.

The number of people receiving legal aid has fallen more than 80% in eight years. Critics say the result is unnecessary conflict and stress, and unsatisfactory justice.

The former justice minister Tom McNally, who pushed the 2012 cuts through parliament, has told the Guardian that although they were needed after the 2008 banking crash, they persisted for too long.

“If we really wanted to make substantial reforms to the criminal justice system, it was almost impossible with the continuation of austerity,” Lord McNally said. He called for a national consensus to be forged on the necessary level of legal aid expenditure.

Among multiple indignities inflicted by the cuts, lawyers say one of the worst is that victims of domestic violence are still being cross-questioned by ex-partners despite government pledges to end the practice.

A wide-ranging Guardian investigation has revealed that the cuts to legal aid have:

The revelations come before a Ministry of Justice (MoJ) review of the impact of the Legal Aid, Sentencing and Punishment of Offenders (Laspo) Act, which delivered the cuts.

The former lord chief justice Lord Thomas of Cwmgiedd has also spoken out about the harm caused by the law, which was intended to slice £350m off the annual legal aid budget but eventually reduced spending by almost triple that.

“Some [past justice secretaries] have agreed to huge cuts without being fully prepared to face up to the consequences of what they were doing,” Thomas said.

The Ministry of Justice has endured deeper cuts than any other Whitehall department since 2010. Prisons, legal aid and probation all come out of a budget that will continue to shrink for two more years.

The family courts have suffered most. Penny Scott, chair of the Law Society’s family law committee and a solicitor at Cartridges Law firm in Exeter, said: “More and more parents are losing touch with their children for various reasons. If there’s a conflict about children, it’s quite difficult for people to take that on unrepresented. Despite the increase in litigants in person … there are fewer and fewer [people] going to court because they can’t face it.”

Jenny Beck, chair of the Law Society’s legal aid practitioners group, said victims of domestic violence were still being questioned by unrepresented perpetrators, particularly in findings-of-fact hearings in family courts, even though ministers had pledged to stop the practice.

“Some judges are refusing but it’s happening more often than previously because there are so many unrepresented perpetrators in the courts,” she said. “You can see the terror on people’s faces.” 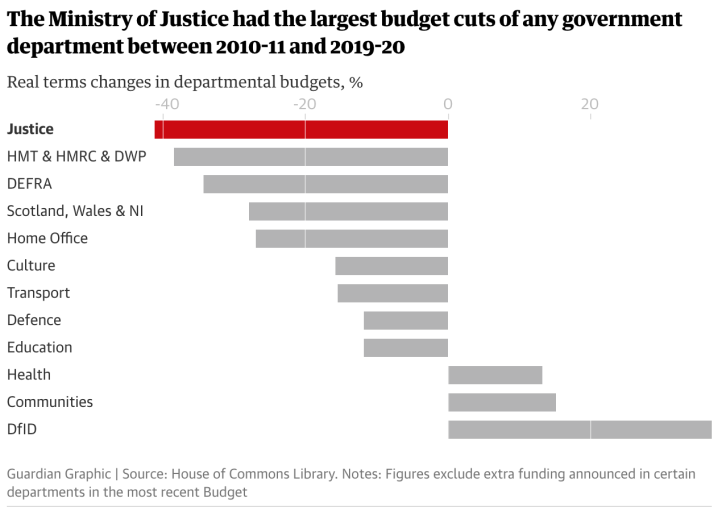 McNally, who was a justice minister from 2010 to 2013 and later ran the Youth Justice Board, said legal aid could not be a “bottomless pit”. But he said he regretted that a reforming bill had been transformed by Conservative ministers into a charter for sustaining high prison numbers.

The lesson he had learned from the 1976 IMF crisis, when he was an aide in Downing Street, was that cuts should be “hard and deep” to restore confidence but not drag on indefinitely. “I said that to [Nick] Clegg and [David] Cameron,” he told the Guardian.

For the MoJ, he said, it was “always a battle in the face of continuing and draconian cuts matching up the needs of the three key services: courts, probation and prisons … There are not a lot of places to go for cuts. So we were continually running up the down escalator.”

McNally said the aim shared with the then justice secretary, Ken Clarke, was for a reforming bill that would save money by reducing prisoner numbers, but it ran into demands from No 10 to add in “punishment” to the legislation’s title.

“We put a proposal to [Downing Street] to try to manage down the prison population from 85,000 to 80,000 over the course of the parliament, because Ken [Clarke] was genuinely shocked that in between him last being responsible for prisoner numbers in the 1990s and 2010, the number of prisoners had doubled from 42,000.”

The initiative was frustrated. “When I expressed disappointment, one Conservative minister told me: ‘This has to pass the Daily Mail test.’”